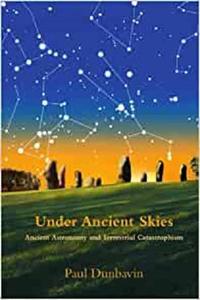 In all of the world’s myths and religions we find traditions of a Great Flood. There are stories too of a Golden Age: the antediluvian paradise that it destroyed. Might these be real memories of the ancient world? And how can we analyse the subject scientifically?
The key to unlock these ancient myths lies in astronomy. Under Ancient Skies will examine the astronomical evidence for a prehistoric cataclysm and in the process will explore a number of related anomalies in prehistory, including:
•Was there a single great flood in human prehistory, or have there been many?
•Could the workings of ancient calendars and the records of ancient eclipses give us clues about the Flood and the antediluvian world?
•Did the Celtic Druids use a calendar based on the orbit of Saturn; and is this the same antediluvian calendar that is described in Plato’s myth of Atlantis?
•Do Hindu, Chinese and Mayan cosmology myths recall the years after the Flood when our world wobbled on its axis?
•Did these same events trigger the building of astronomically aligned monuments such as Stonehenge and the pyramids?
•Was the Atenist religion of the heretic Egyptian Pharaoh Akhenaten inspired by a series of eclipses during his lifetime?
•Do the seven good years and the seven bad years of the Joseph story recall a time when a comet struck the Earth?
•Did the British Druids use astronomy to calculate the size of the Earth; and could they have used this knowledge to navigate to America?
•Why were the ancient Celts so afraid that the sky would one day fall on their heads?
•Are comets and asteroids the only danger lurking in the cosmos – or could there be other dangers as yet unknown to science?
In 1994 we watched as a comet struck the giant planet Jupiter. Geologists have recently discovered the crater in Yucatan, where an asteroid impact destroyed the world of the dinosaurs. Scientists and astronomers have stopped dismissing the theory that asteroids and comets could have struck the Earth during prehistory – but any suggestion that a comet impact just a few thousand years ago might have caused the Biblical Flood, remains the last taboo. It is time for this prejudice too, to be washed away.
The reader is promised ‘a real book: a fully referenced textbook with original content in every chapter and a bibliography of over 300 sources, If you have read Paul Dunbavin’s other books then you will know what to expect. First published in 2005 and for a long time out of print, this new edition will make the author’s unique research available again to anyone who is interested in mythology, astronomy and ancient mysteries.