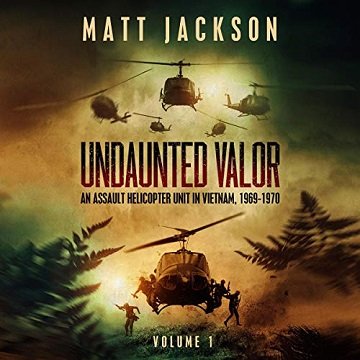 American troops are in contact….The UH-1H helicopter swoops in to bail them out….Tracer fire everywhere, the windshield shatters, the door gunners returning fire….Will Colonel Cory’s helicopter be able to rescue the pinned down soldiers? Undaunted Valor is the firsthand account of helicopter pilot, Colonel Dan Cory as he flies combat missions in the jungles of Vietnam. From dodging enemy ground fire and RPGs, to constant mortar and rocket attacks on his base, Colonel Cory stared down the enemy to bring his fellow soldiers’ home.
Join Colonel Cory as he recounts some of the most intense helicopter and ground combat of the Vietnam War from the eyes of a man who spent two combat tours there. From being shot down by enemy fire, to leading his air crew to repel an enemy assault, Colonel Cory’s firsthand accounts of the Vietnam War are awe-inspiring. Awarded the Silver Star, and two Bronze Stars for Valor, Cory’s hair-raising accounts of what it was like to fly over the uungles of Vietnam will make you feel as if you are right there with him.