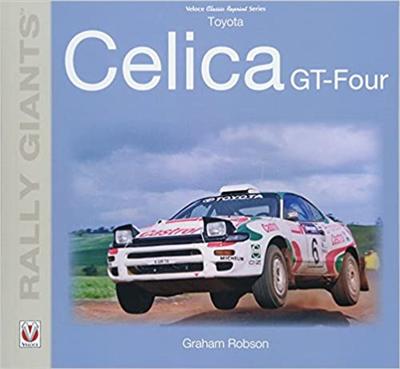 This is a comprehensive study of the career of the Toyota Celica GT-Four. Starting in 1988, three generations of this effective turbocharged four-wheel-drive car – known by enthusiasts as ST165, ST185 and ST205 types – fought for World Championships, and were amazingly successful for almost a decade.

All types combined high-performance, great reliability, and superb preparation by Toyota Team Europe (based in Cologne, Germany), their 300bhp/four-wheel-drive chassis package being among the best in the world. Over the years, the cars won some of the roughest events in the world (such as the Safari and the Acropolis), and were also supreme on tarmac, snow and ice, including Monte Carlo.

After fighting a running battle with Lancia for years, the Celicas won the World Manufacturers’ Championship twice. Its famous drivers included Carlos Sainz (World Champion in 1990 and 1992), Juha Kankkunen (Champion in 1993) and Didier Auriol (Champion in 1994).

Never far from controversy, and at times embroiled in technical and regulatory disputes, these cars brought real glamour to the colourful sport of rallying, and were only replaced by an even higher-tech Toyota – the Corolla World Rally Car – in 1997.