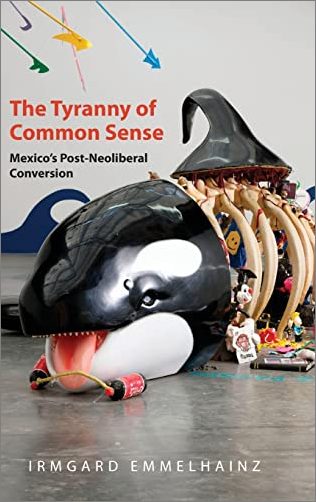 Elucidates how neoliberalism rules all areas of life and operates as a form of common sense, taking Mexico as a case study.

As one of the first countries to implement a neoliberal state apparatus, Mexico also serves as a prime example of the effects of neoliberal structural economic reform on our sensibility. Irgmard Emmelhainz argues that, in addition to functioning as a form of politico-economic organization, neoliberalism creates particular ways of seeing and understanding the world. It reconfigures common sense, justifying destruction and dispossession in the name of progress and development, and promising to solve economic precarity with self-help and permanent education. Pragmatism reigns, yet in always aiming to maximize individual benefit and profit, such common sense perpetuates―and is even the cause of―relationships of power and control. In Mexico, one of the main consequences of the implementation of neoliberalism has been that life and death are now part of the economy, manifesting as a culture of violence that both denigrates and gives life. Still, Emmelhainz makes clear that these sorts of paradoxes are not unique to Mexico. Integrating theory with history and lived reality with art, film, and literary criticism, The Tyranny of Common Sense will appeal to both academics and readers interested in the effects of neoliberalism in Mexico from a broader, global perspective.

Irmgard Emmelhainz is the author of Jean-Luc Godard’s Political Filmmaking.