The Ghastly One: The Sex Gore Netherworld of Filmmaker Andy Milligan 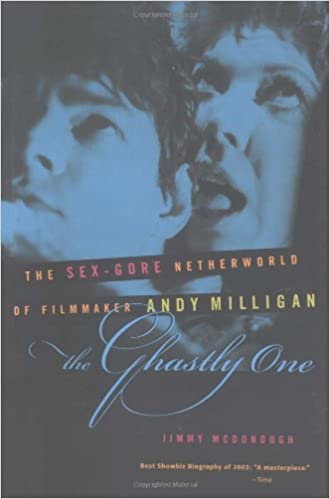 "From 1965 to 1988, Andy Milligan made an astounding 29 exploitation movies, including Gutter Trash, Torture Dungeon, The Ghastly Ones, Seeds, Bloodthirsty Butchers, and Fleshpot on 42nd Street. For most of the shlockmeisters, exploitation was a joke. But for Milliganùa sadist, a misogynist, a maniacùthis was his own private reality. The Fassbinder of 42nd Street, Milligan brought a crazed intensity to his work, making films of the heart in a milieu where the only art was the con. Based on hundreds of interviews, excerpts from lost movies and plays, and ranting narratives from Milligan himself, this is a story of how one unrelenting soul attempted to escape his demons and create his own twisted universe, a universe peopled by abortion-clinic bombers, undercover transsexuals, disgruntled hustlers, and bestiality-loving exhibitionists. This is a tale of violenceùphysical, sexual, and psychological. Even the author himself got sucked in, appearing in one of MilliganÆs last gore-fests and nearly getting killed in the process. The sick secrets revealed in this book will unnerve even hard-core grind house fans. But The Ghastly Oneùprofusely illustrated with rare and strange stills shot by Milligan himselfùisnÆt just about a lone lunatic with a movie camera. ItÆs a funny, unbelievable, and oddly moving history of exploitation films as well as a vivid portrait of New YorkÆs infamous CaffT Cino, the Warhol crowd, and the vibrant but malevolent place called Times Square and what got lost when it sold its soul to Mickey Mouse. This replaces 1556524269."