Runaway Devil: How Forbidden Love Drove a 12 Year Old to Murder Her Family 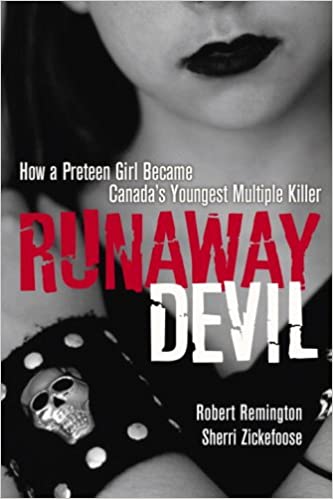 Marc and Debra seemed to have it all – a lovely home in the Prairie town of Medicine Hat, fulfilling careers, a supportive marriage, and two beautiful children: eight-year-old Jacob and twelve-year-old JR. After years of struggle to reach this point, they finally felt their future held promise. But on April 23, 2006, their bodies were discovered in their basement, covered in savage stab wounds. Upstairs, Jacob lay dead on his bed, his toys spattered with blood.

Investigators worried for JR’s safety, but unknown to them, the pretty honour roll student had been developing a disturbing alter ego online. Runaway Devil professed a fondness for a darker world of death metal music, the goth subculture, and a love for Jeremy Steinke, a twenty-three-year-old high-school dropout who lived in a rundown trailer park. Soon, shocking evidence in JR’s school locker – printed here for the first time – led police to believe the girl was a suspect in her family’s murders.

The case horrified parents everywhere. Journalists Robert Remington and Sherri Zickefoose have been covering it from the beginning, and in Runaway Devil, they reveal what really happened: the unlikely young love, the teenage rebellion, a troubling world of adolescent drifters, and a small community torn apart by an unthinkable crime.

A modern cautionary tale, Runaway Devil is also a chilling portrait of an approval-seeking man smitten with a manipulative young girl – who would stop at nothing to get what she wanted.