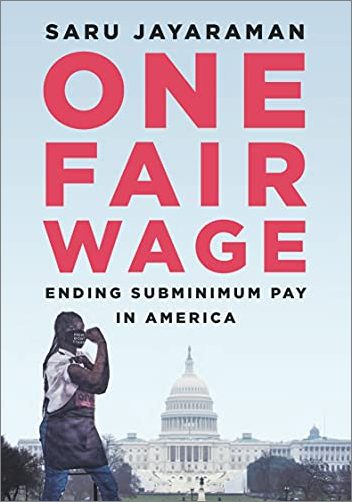 From the author of the acclaimed Behind the Kitchen Door, a powerful examination of how the subminimum wage and the tipping system exploit society’s most vulnerable
“No one has done more to move forward the rights of food and restaurant workers than Saru Jayaraman.” -Mark Bittman, author of The Kitchen Matrix and A Bone to Pick

Before the COVID-19 pandemic devastated the country, more than six million people earned their living as tipped workers in the service industry. They served us in cafes and restaurants, they delivered food to our homes, they drove us wherever we wanted to go, and they worked in nail salons for as little as $2.13 an hour-the federal tipped minimum wage since 1991-leaving them with next to nothing to get by.

These workers, unsurprisingly, were among the most vulnerable workers during the pandemic. As businesses across the country closed down or drastically scaled back their services, hundreds of thousands lost their jobs. As in many other areas, the pandemic exposed the inadequacies of the nation’s social safety net and minimum-wage standards.

One of New York magazine’s “Influentials” of New York City, one of CNN’s Visionary Women in 2014, and a White House Champion of Change in 2014, Saru Jayaraman is a nationally acclaimed restaurant activist and the author of the bestselling Behind the Kitchen Door. In her new book, One Fair Wage, Jayaraman shines a light on these workers, illustrating how the people left out of the fight for a fair minimum wage are society’s most marginalized: people of color, many of them immigrants; women, who form the majority of tipped workers; disabled workers; incarcerated workers; and youth workers. They epitomize the direction of our whole economy, reflecting the precariousness and instability that is increasingly the lot of American labor.