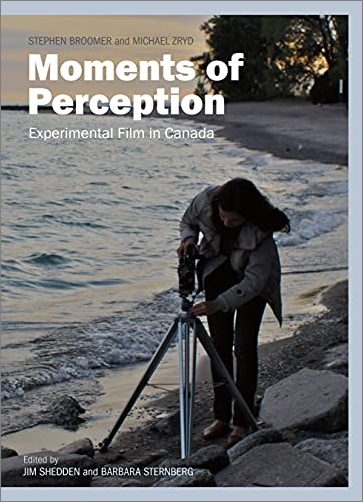 Film is the art form of our times. It has formed the background of our lives, informed visual arts practices, and formed our culture’s stories, its memory.

Moments of Perception is a landmark book. The first history of twentieth and early-twenty-first-century Canadian experimental filmmaking, it maps avant-garde film across the country from the 1950s to the present day, including its contradictions and complexities.

Experimental film is political in its very existence, critical of the status quo by definition. In Canada, some of the country’s best-known artists took up the moving image as a form of artistic expression, allowing them to explore explicitly political themes. Mike Hoolboom’s exposure of the horror of AIDS, Josephine Massarella’s concern for the environment, and Joyce Wieland’s satiric look at US patriotism are just a few examples of work that contributed to social movements and provided a means to explore issues of race and gender and 2SLGBTQ+ and Indigenous identities.

Featuring a major essay on the history of the movement by Michael Zryd and profiles of key filmmakers by Stephen Broomer and editors Jim Shedden and Barbara Sternberg, Moments of Perception offers a fresh perspective on the ever-evolving history of Canada’s experimental film and moving image media arts.