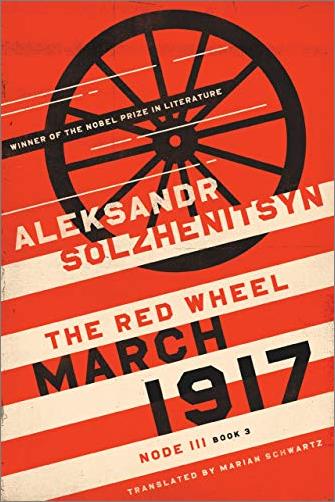 In March 1917, Book 3 the forces of revolutionary disintegration spread out from Petrograd all the way to the front lines of World War I, presaging Russia’s collapse.
One of the masterpieces of world literature, The Red Wheel is Nobel prize-winner Aleksandr Solzhenitsyn’s multivolume epic work about the Russian Revolution told in the form of a historical novel. March 1917―the third node―tells the story, day by day, of the Russian Revolution itself. Until recently, the final two nodes have been unavailable in English. The publication of Book 1 of March 1917 (in 2017) and Book 2 (in 2019) has begun to rectify this situation.

The action of Book 3 (out of four) is set during March 16-22, 1917. In Book 3, the Romanov dynasty ends and the revolution starts to roll out from Petrograd toward Moscow and the Russian provinces. The dethroned Emperor Nikolai II makes his farewell to the Army and is kept under guard with his family. In Petrograd, the Provisional Government and the Soviet of Workers’ and Soldiers’ Deputies continue to exercise power in parallel. The war hero Lavr Kornilov is appointed military chief of Petrograd. But the Soviet’s “Order No. 1” reaches every soldier, undermining the officer corps and shaking the Army to its foundations. Many officers, including the head of the Baltic Fleet, the progressive Admiral Nepenin, are murdered. Black Sea Fleet Admiral Kolchak holds the revolution at bay; meanwhile, Grand Duke Nikolai Nikolaevich, the emperor’s uncle, makes his way to military headquarters, naïvely thinking he will be allowed to take the Supreme Command.