Magnetoelectronics of Microwaves and Extremely High Frequencies in Ferrite Films 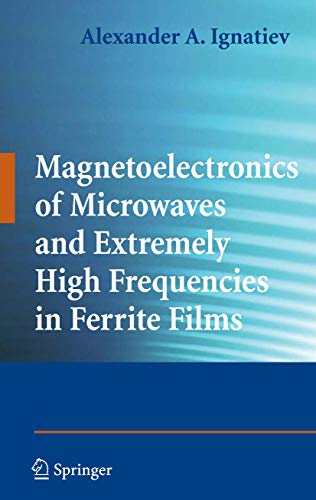 Magnetoelectronics of Microwaves and Extremely High Frequencies in Ferrite Films, by Alexander A. Ignatiev of Saratov State University in Russia, offers a very detailed and specialized account of a new direction of magnetoelectronics of millimetric waves in the layered structures containing epitaxial ferrite films. The new electrodynamic approach for research of electromagnetic waves in layered bigyrotropic structures – excitation of waves in converters with parallel and orthogonal orientations – is thoroughly discussed.
The book is divided into three parts

– methods and devices for high-frequency parameter control of ferrite films

This book is intended for post-graduate students and researchers in the field of radiophysics and magnetoelectronics of millimetric waves, as well as those specializing in device design using ferrites.