Hitler and India: The Untold Story of his Hatred for the Country and its People 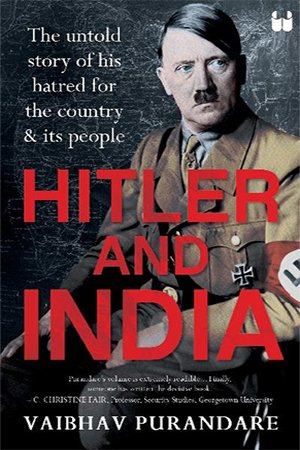 Hitler’s autobiography, Mein Kampf, is a perennial bestseller in India, with even street-side bookstalls prominently displaying stacks of it. The name ‘Hitler’ -anathema almost everywhere else in the world-is tossed about casually in the Indian subcontinent, not infrequently invoked in praise. Many Indians still harbour the notion that the Führer was a friend of the Indian people and had extended wholehearted support to their freedom struggle. To journalist and historian Vaibhav Purandare, this clearly suggested that Indians continued to be largely unaware of the German dictator’s views on India, in spite of the fact that they are unambiguously expressed in his own writings. This lacuna spurred him on to delve into the archives-in Germany, India and elsewhere.

The result of Purandare’s research is this comprehensive and painstaking portrait and analysis of Hitler’s outlook on India and its people, his opinion of their struggle against the British Raj, and his take on Indian history, culture and civilisation. Also within these pages are surprising details of Netaji Bose’s entanglement with the Reich, the experience of other Indians living in Nazi Germany, the mission that Hitler sent to the Himalayas in search of ‘pure-blood Aryans’, and a number of other little-known historical nuggets. Accessible and rich in detail, Hitler and India is the very first examination of what India meant to a figure who, perplexingly, remains quite alive in the country.