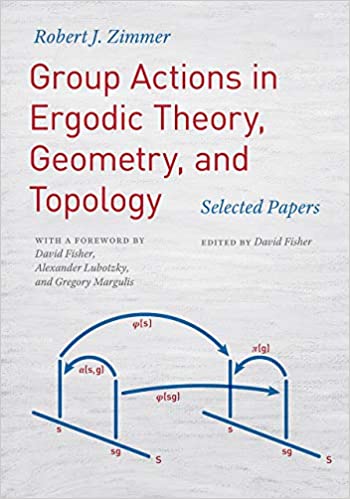 Robert J. Zimmer is best known in mathematics for the highly influential conjectures and program that bear his name. Group Actions in Ergodic Theory, Geometry, and Topology: Selected Papers brings together some of the most significant writings by Zimmer, which lay out his program and contextualize his work over the course of his career. Zimmer’s body of work is remarkable in that it involves methods from a variety of mathematical disciplines, such as Lie theory, differential geometry, ergodic theory and dynamical systems, arithmetic groups, and topology, and at the same time offers a unifying perspective. After arriving at the University of Chicago in 1977, Zimmer extended his earlier research on ergodic group actions to prove his cocycle superrigidity theorem which proved to be a pivotal point in articulating and developing his program. Zimmer’s ideas opened the door to many others, and they continue to be actively employed in many domains related to group actions in ergodic theory, geometry, and topology.

In addition to the selected papers themselves, this volume opens with a foreword by David Fisher, Alexander Lubotzky, and Gregory Margulis, as well as a substantial introductory essay by Zimmer recounting the course of his career in mathematics. The volume closes with an afterword by Fisher on the most recent developments around the Zimmer program.
Read more