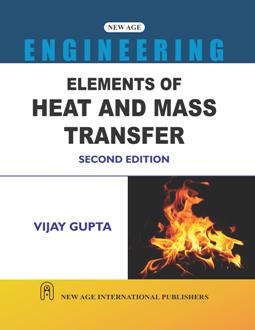 This text is a thoroughly revised and enlarged edition of the book Heat and Mass Transfer which was very well received by the readers. The aim of this edition remains the same as that of the first edition: to guide the students towards a sound physical basis of obtaining first estimates of the varied heat and mass transfer problem that they are likely to encounter. For this purpose the book develops the physical principles with a fairly high level of rigour, but at the same time devotes considerable attention to the techniques of approximations and modelling of complex physical situations so that they become amenable to alimentary methods of analysis. Some of the novel features of this book are: it brings together in Chapter 1 an overview of the subject, exposing the reader to the wide variety of contexts in which heat and mass transfer problems arise in engineering practice; it provides very early the technique of normalizing the governing equations and boundary conditions to be able to meaningfully talk of the approximations resorted to in various alimentary techniques; it introduces the essence of the convection phenomenon through one case where it is brought out the best with least clouding by mathematics, namely, transpiration cooling; it treats in Chapter 5 the essentials of convection including the concept of boundary layer and dimensionless correlations at a lower mathematical level than it is traditionally done; It brings out the concept of full-development with physical insights; and it consciously attempts to bring out the similarity between heat and mass transfer and uses the same symbols with the hope that the additional efforts to learn mass transfer will be considerably reduced.