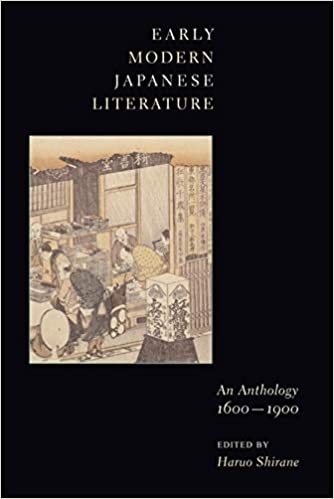 This is the first anthology ever devoted to early modern Japanese literature, spanning the period from 1600 to 1900, known variously as the Edo or the Tokugawa, one of the most creative epochs of Japanese culture. This anthology, which will be of vital interest to anyone involved in this era, includes not only fiction, poetry, and drama, but also essays, treatises, literary criticism, comic poetry, adaptations from Chinese, folk stories and other non-canonical works. Many of these texts have never been translated into English before, and several classics have been newly translated for this collection.

introduces English readers to an unprecedented range of prose fiction genres, including dangibon (satiric sermons), kibyôshi (satiric and didactic picture books), sharebon (books of wit and fashion), yomihon (reading books), kokkeibon (books of humor), gôkan (bound books), and ninjôbon (books of romance and sentiment). The anthology also offers a rich array of poetry―waka, haiku, senryû, kyôka, kyôshi―and eleven plays, which range from contemporary domestic drama to historical plays and from early puppet theater to nineteenth century kabuki. Since much of early modern Japanese literature is highly allusive and often elliptical, this anthology features introductions and commentary that provide the critical context for appreciating this diverse and fascinating body of texts.

One of the major characteristics of early modern Japanese literature is that almost all of the popular fiction was amply illustrated by wood-block prints, creating an extensive text-image phenomenon. In some genres such as kibyôshi and gôkan the text in fact appeared inside the woodblock image. Woodblock prints of actors were also an important aspect of the culture of kabuki drama. A major feature of this anthology is the inclusion of over 200 woodblock prints that accompanied the original texts and drama.
Read more