Deadly Embrace: Pakistan, America, and the Future of the Global Jihad 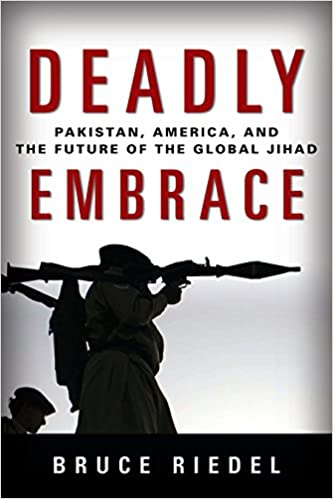 Pakistan and the United States have been locked in a deadly embrace for decades. Successive American presidents from both parties have pursued narrow short-term interests in the South Asian nation, and many of the resulting policies proved counterproductive in the long term, contributing to political instability and a radicalized public. This background has helped set the stage for the global jihad confronting much of the world today.

In Deadly Embrace, Bruce Riedel explores the forces behind these developments, explaining how and why the history of Pakistan-U.S. relations has unfolded as it has. He explains what the United States can do now to repair the damage and how it can avoid making similar mistakes in dealing with extremist forces in Pakistan and beyond.

Riedel is one of America’s foremost authorities on U.S. security, South Asia, and terrorism, and he helped to craft President Obama’s 2009 speech referring to the Pakistan-Afghanistan borderlands as the "most dangerous region of the world." He follows up The Search for al Qaeda, his influential 2008 analysis of the terror network’s ideology and leadership, with a sober, authoritative, and sometimes alarming look at the history, importance, and current role of Pakistan, epicenter of the global jihad movement, beginning with the history of U.S.-Pakistan relations since the partitioning of the subcontinent in 1947.

The relationship between Pakistan and America is a fascinating yet muddled story, meandering through periods of friendship and enmity, symbiosis and distrust: it’s no wonder that people in both nations are confused. Deadly Embrace explains how the United States, on several occasions, actually helped the foes of democracy in Pakistan and aided in the development of the very enemies it is now fighting in the region. The book seeks to unravel this paradox, revealing and interpreting the tortuous path of relations between two very different nations, which remain, in many ways, stuck with each other.