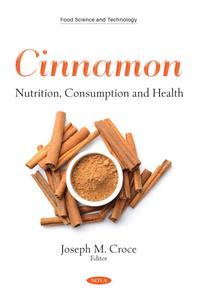 Cinnamon: Nutrition, Consumption and Health first explores the benefits of cinnamon and its components on metabolic impairments in diabetes, a disorder caused by impaired insulin release and action, and defective metabolisms of nutrients such as carbohydrates, lipids, and proteins.
In addition, the authors discuss the antioxidant, antimicrobial, and flavor properties of cinnamon and its potential as a functional ingredient.
A study was conducted to evaluate the effects of chitosan nano-encapsulating mint, thyme and cinnamon essential oils on performance, immune responses and intestinal bacteria population in broiler chickens.
In closing, the causes of variations of compounds present in cinnamon essential oil are reviewed, such as: climatic conditions, drying conditions, extraction methods, and the analysis method for chemical characterization