Baroque Modernity: An Aesthetics of Theater 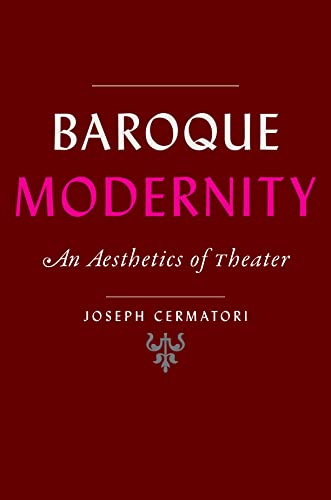 Baroque style-with its emphasis on ostentation, adornment, and spectacle-might seem incompatible with the dominant forms of art since the Industrial Revolution, but between 1875 and 1935, European and American modernists connected to the theater became fascinated with it. In Baroque Modernity, Joseph Cermatori argues that the memory of seventeenth-century baroque stages helped produce new forms of theater, space, and experience around the turn of the twentieth century. In response, modern theater helped give rise to the development of the baroque as a modern philosophical idea.

The book focuses on avant-gardists whose writing takes place between theory and performance: philosophical theater-makers and theatrical philosophers including Friedrich Nietzsche, Stéphane Mallarmé, Walter Benjamin, and Gertrude Stein. Moving between page and stage, this study tracks the remnants of seventeenth-century theater through modernist aesthetics across an array of otherwise disparate materials, including modern opera, Bertolt Brecht’s Epic Theater, poetic tragedies, and miracle plays. By reexamining the twentieth century’s engagements with Gianlorenzo Bernini, William Shakespeare, Claudio Monteverdi, Calderón de la Barca, and other seventeenth-century predecessors, the book delineates an enduring tradition of baroque performance. Along the way, Cermatori expands our familiar narratives of "the modern" and traces a history of theatricality that reverberates into the twenty-first century.

Baroque Modernity will appeal to readers in a wide array of disciplines, including comparative literature, theater and performance, art and music history, intellectual history, and aesthetic theory.