An AGI Brain for a Robot 1st Edition 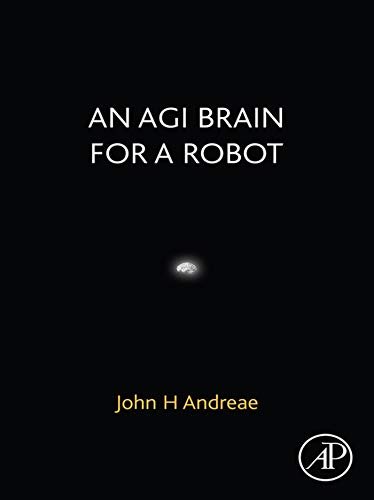 An AGI Brain for a Robot is the first and only book to give a detailed account and practical demonstration of an Artificial General Intelligence (AGI). The brain is to be implemented in fast parallel hardware and embodied in the head of a robot moving in the real world. Associative learning is shown to be a powerful technique for novelty seeking, language learning, and planning. This book is for neuroscientists, robot designers, psychologists, philosophers and anyone curious about the evolution of the human brain and its specialized functions.

The overarching message of this book is that an AGI, as the brain of a robot, is within our grasp and would work like our own brains. The featured brain, called PP, is not a computer program. Instead, PP is a collection of networks of associations built from J. A. Fodor’s modules and the author’s groups. The associations are acquired by intimate interaction between PP in its robot body and the real world. Simulations of PP in one of two robots in a simple world demonstrate PP learning from the second robot, which is under human control.

"Both Professor Daniel C. Dennett and Professor Michael A. Arbib independently likened the book ‘An AGI Brain for a Robot’ to Valentino Braitenberg’s 1984 book ‘Vehicles: Experiments in Synthetic Psychology’." Daniel C. Dennett, Professor of Philosophy and Director of Center for Cognitive Studies, Tufts University. Author of "From Bacteria to Bach and Back: The Evolution of Minds."

"Michael Arbib, a long time expert in brain modeling, observed that sometimes a small book can catch the interest of readers where a large book can overwhelm and turn them away. He noted, in particular, the success of Valentino Braitenberg’s ‘Vehicles’ (for which he wrote the foreword). At a time of explosive interest in AI, he suggests that PP and its antics may be just the right way to ease a larger audience into thinking about the technicalities of creating general artificial intelligence." Michael A Arbib, Professor Emeritus of Computer Science, Biomedical Engineering, Biological Sciences and Psychology, University of Southern California. Author of "How the Brain Got Language".

"Robots seem to increasingly invade our lives, to the point that sometimes seems threatening and other-worldly. In this small book, John Andreae shows some of the basic principles of robotics in ways that are entertaining and easily understood, and touch on some of the basic questions of how the mind works." Michael C. Corballis, Professor of Psychology, University of Auckland. Author of "The Recursive Mind".

"A little book that punches far beyond its weight." Nicholas Humphrey, Emeritus Professor of Psychology, London School of Economics. Author of "Soul Dust: The Magic of Consciousness".

"A bold and rich approach to one of the major challenges for neuroscience, robotics and philosophy. Who will take up Andreae’s challenge and implement his model?" Matthew Cobb, Professor of Zoology, University of Manchester. Author of "The Idea of the Brain".

"Here is a book that could change the direction of research into artificial general intelligence in a very productive and profitable way. It describes a radical new theory of the brain that goes some way towards answering many difficult questions concerning learning, planning, language, and even consciousness. Almost incredibly, the theory is operational, and expressed in a form that could-and should-inspire future, novel, research in AI that transcends existing paradigms." Ian H. Witten, Professor of Computer Science, Waikato University. Author with Eibe Frank of "Data Mining: Practical Machine Learning Tools and Techniques".