Aliens in Ancient Egypt: The Brotherhood of the Serpent and the Secrets of the Nile Civilization (PDF) 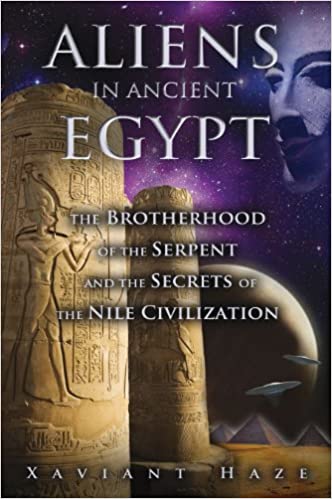 • Explains how Akhenaten was the last pharaoh entrusted with the sacred and ancient alien knowledge of stargates, free energy, and antigravity technologies

• Reveals how the Brotherhood of the Snake, a secret society of reptilian aliens, sought to destroy Akhenaten and suppress the sacred knowledge of the pharaohs

The sophisticated civilization of ancient Egypt arose seemingly overnight, complete with advanced levels of art, agriculture, astronomy, and physics. Then, with the death of Pharaoh Akhenaten, much of this higher knowledge was lostor suppressed. But evidence of this former Golden Age, the alien visitors behind its rise, and those behind its decline still existssome of it in plain sight.

Examining the purposefully obscured reign of Akhenaten and Nefertiti, Xaviant Haze explains how they represent the last dynasty with access to the sacred knowledge of stargates, free energy, and antigravity technologies, knowledge handed down from an advanced interstellar race in the remote past. He reveals how the reptilian race known as the Shemsu Hor infiltrated the Egyptian priesthood and banking systems and formed the Brotherhood of the Snakea secret society set on destroying Akhenaten’s flourishing kingdom and suppressing the sacred knowledge of the pharaohs.

Haze examines the evidence of aliens in ancient Egypt, such as the reptilian beings depicted in the Temple of Hathor and Thutmose III’s alien encounter. He shows how Akhenaten and his family are always portrayed with elongated skulls and explores the connection between ancient aliens and Mars, including the Martian materials used in Egyptian monuments. He explains the original purpose of the pyramidsto transmit uplifting energy throughout the planet to help expand consciousnessand explores how they were decommissioned after the Great Flood of prehistory. He reveals how the original builders of the pyramids foresaw humanity’s fall from the Golden Age and strategically encoded these magnificent structures to wake humanity from the depths of the Dark Ages.
Read more