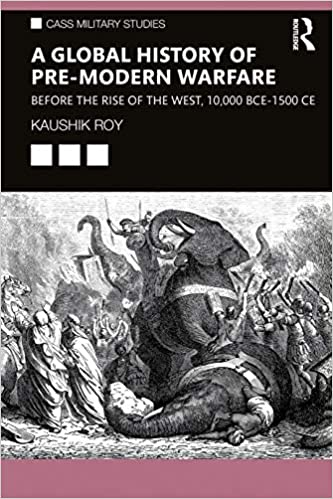 This book examines the military histories of the regions beyond Western Europe in the pre-modern era.
Existing works on global military history mainly focus on the western part of Eurasia after 1500 CE. As regards the ancient period, such works concentrate exclusively on Greece and Rome. So, ‘global’ military history is actually the triumphal story of the West from Classical Greece onwards. This volume focuses not only on the eastern part of Eurasia but also on South America, Africa and Australasia and seeks to explain the history and varied trajectories of warfare in non-Western regions in the pre-modern era. Further, it evaluates whether warfare in non-Western regions should be considered primitive or inferior when compared with Western warfare. The book notes that Western Europe became militarily significant only in the early modern era and argues that the military divergence that occurred during the early modern era is not unique – it had also occurred in the Bronze Age, the Classical era and in the medieval period. This was due to the dynamism and innovativeness of non-Western militaries and the interconnectedness that existed in parts of the Eurasian landmass. Further, those polities which were able to construct a balanced military force by synthesising diverse elements were not only able to survive but also became capable of projecting power across continents.
Read more